Peter Freeman, Inc., is pleased to present “Medardo Rosso: Bambino ebreo,” an internationally unprecedented exhibition bringing together ten casts of one sculpture by Rosso (1858-1928), one of the most important Italian artists of the modern era. Curated by art historian and Rosso scholar Sharon Hecker, this exhibition is the first time in the history of this artist’s work that viewers will have the opportunity to see so many examples of one Rosso subject in the same space, providing enormous insight into his innovative, even radical, working methods.

The show will comprise important loans from international museums and private collections, many never publicly exhibited before; these include the original plaster from the Museo Medardo Rosso in Barzio, Italy, a bronze from Museum Folkwang in Essen, Germany, and a wax from The Nasher Sculpture Center in Dallas.

Bambino ebreo [Jewish Boy], conceived in Paris in the 1890s, had special meaning for Rosso: throughout his life he frequently reproduced it for exhibitions, sales, and personal gifts. From Rosso’s time until today, interpretations of this disconsolate face of a young boy have oscillated between a portrait of a young Rothschild and an abstraction. The work has been variously read as a universal metaphor of social alienation, suffering, loneliness, sadness, Jewishness and even childhood itself.

The show will formulate questions related to creative approaches to serial sculpture and will be grounded in a technical assessment of Rosso’s idiosyncratic working methods. A skilled founder who was deeply interested in questions of process, he was one of a few sculptors of his time to make his own casts rather than rely on commercial foundries. Such a level of control allowed him to conceive of each cast both as a unique object and as part of a series, as well as a site for technical experimentation. By placing the casts side by side, we can appreciate Rosso’s variations and the subtle or dramatic changes he made from cast to cast. A careful comparative study will bring to light the sculptor’s ideas and techniques, his unusual handling of different materials (plaster, wax, bronze), chromatic variations (ranging from matte to polished, pale yellow to black), and innovative manipulation of bases, through which he attempted to vary angles of presentation.

From Routledge Encyclopedia of Modernism, entry by Sharon Hecker: “Medardo Rosso (1858-1928) was a pivotal yet enigmatic figure for the origin and development of modern European sculpture. In his fewer than fifty original subjects cast in plaster, wax and bronze, he represented emotionally charged glimpses of introverted, sick, laughing, anxious or smiling heads and figurines, especially of women, children and the elderly. By modulating the sculptural surface, he made his works receptive to subtle changes of light, expressing a radical idea of “dematerializing” the three-dimensional object, as if it were subject to the influence of time and its surrounding atmosphere. Rosso began his career in Milan but spent three decades in Paris and was naturalized as a French citizen before returning to Milan in his last years. Along with Auguste Rodin, he was considered the founder of “Impressionist sculpture,” although his works also reflected his interest in Realism and Symbolism. In France, critics believed him to have been Rodin’s unacknowledged rival in the birth of modern sculpture and an influence on the 1898 Monument to Balzac. In Italy, he was hailed as the forefather of Futurism, prefiguring their experiments with movement and speed. Today, contemporary artists admire his precocious interest in materials and creative casting that left evidence of artistic process on his works.” 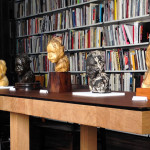 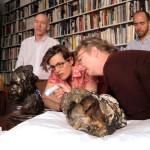 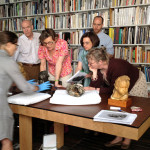 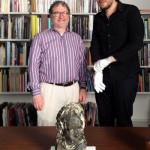